Grant Palmer has written two essays dealing with Joseph Smith and plural marriage.  While he seems to be an amiable individual, his scholarship is dismal and worthy of the highest criticism.  Generally his writings would not merit a response here because of their inadequacies, but due to the observation that many people believe him to be a scholar, Greg Smith and I composed a response to his latest essay.  It can be found here: 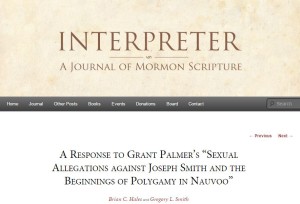 On February 26, 2012, Mormon Stories (with the talented interviewer John Dehlin) posted a episode entitled “Early Sexual Allegations against Joseph Smith.” During the discussion, Palmer made several accusations against Joseph Smith. While Grant is a kind individual and has apparently done some scholarly work in the past, his treatment of the alleged “sexual allegations” represents some of the poorest scholarship I have encountered regarding Joseph Smith and plural marriage. I believe his presentation is worthy of high criticism because of the misrepresentations and inaccuracies presented.

My response to Grant Palmer’s presentation with PowerPoint slides is available here. For audio only, click here.