In the spring of 1842, Joseph Smith told members of the Quorum of the Twelve and possibly a few other members that God commanded them to enter into plural marriages as a sign of obedience and faith.

Apostle John Taylor recalled: “[At] the time when men were commanded to take more wives. It made us all pull pretty long faces sometimes. 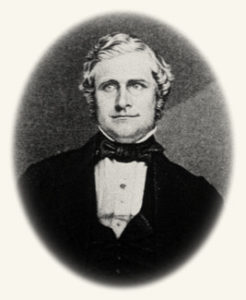 It was not so easy as one might think. When it was revealed to us, it looked like the last end of Mormonism. For a man to ask another woman to marry him required more self-confidence than we had.”1

Brigham related: “My brethren know what my feelings were at the time Joseph revealed the doctrine; I was not desirous of shrinking from any duty, nor of failing in the least to do as I was commanded, but it was the first time in my life that I had desired the grave, and I could hardly get over it for a long time. And when I saw a funeral, I felt to envy the corpse its situation, and to regret that I was not in the coffin.”2

Despite these feelings, Brigham Young may have been the first member outside Joseph to make a plural marriage proposal. The young lady selected was Martha Brotherton, a woman Brigham had met while on his mission in England. 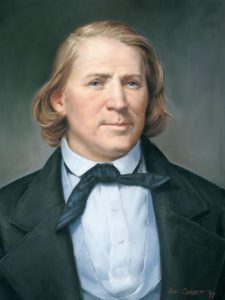 Of all the polygamous marriage proposals made in Nauvoo during Joseph Smith’s lifetime, Brigham Young’s to Martha Brotherton is the only one that was recorded and published soon after it occurred.3

Although the account is from an antagonistic source and appears to be somewhat tainted, it is contemporary and contains many interesting details. It describes Heber C. Kimball bringing Martha and Brigham together in Joseph Smith’s office upstairs in the Red Brick Store. Soon Brigham introduced the topic of plural marriage, which understandably shocked Martha, who had no inkling regarding its modern-day practice.

My feelings at that moment were indescribable. God only knows them. What, thought I, are these men, that I thought almost perfection itself, deceivers!” and is all my fancied happiness but a dream? ‘Twas even so; but my next thought was, which is the best way for me to act at this time? If I say no, they may do as they think proper; and to say yes, I never would. So I considered it best to ask for time to think and pray about it. I therefore said, “If it was lawful and right, perhaps I might; but you know, sir, it is not.”4

Like almost all other women, Martha’s initial reaction was revulsion. But unlike most, she stated that her faith in the Restoration was instantly shaken. She reported that she then felt deceived and disheartened.

Sensing her concern, Brigham left her alone and found Joseph, who joined Martha and Brigham in the office:

“Well,” said Young [to Joseph], “sister Martha would be willing if she knew it was lawful and right before God.” “Well, Martha,” said Joseph, “it is lawful and right before God — I know it is. … I have the keys of the kingdom, and whatever I bind on earth is bound in heaven, and whatever I loose on earth is loosed in heaven, and if you will accept of Brigham, you shall be blessed—God shall bless you, and my blessing shall rest upon you; and if you will be led by him, you will do well; for I know Brigham will take care of you.5

Despite Joseph and Brigham’s explanations, Martha remained unconvinced. She requested time to think it over and the leaders agreed.

In the following days, Martha refused the offer of marriage and informed her parents, who instantly lost their faith. Together they moved to St. Louis, Missouri. It is apparent that rumors of the conversation spread about Nauvoo. Weeks later, on April 6, in General Conference, the Prophet “spoke in contradiction of a report in circulation about Elder Kimball, B. Young, himself, and others of the Twelve, alleging that a sister had been shut in a room for several days, and that they had endeavored to induce her to believe in having two wives.”6 The gossip may have contained elements of truth, but on the whole, was not entirely accurate.

Despite the early failure, Brigham Young successfully married Lucy Ann Decker polygamously on June 14, 1842.7 No details of that proposal are known. 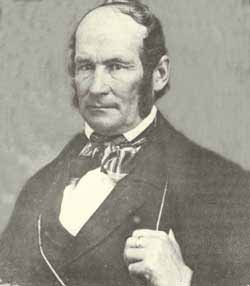 Before he [Joseph Smith] would trust even Heber with the full secret however, he put him to a test which few men would have been able to bear.

It was not less than a requirement for him to surrender his wife, his beloved Vilate, and give her to Joseph in marriage!

The astounding revelation well-nigh paralyzed him [Heber C. Kimball]. He could hardly believe he had heard aright. Yet Joseph was solemnly in earnest. His next impulse was to spurn the proposition, and perhaps at that terrible moment a vague suspicion of the Prophet’s motive and the divinity of the revelation, shot like a poisoned arrow through his soul. …

His heart-strings might be torn, his feelings crucified and sawn asunder, but so long as his faith in God and the Priesthood remained, heaven helping him, he would try and do as he was told. Such, now, was his superhuman resolve.

Three days he fasted and wept and prayed. Then, with a broken and a bleeding heart, but with soul self-mastered for the sacrifice, he led his darling wife to the Prophet’s house and presented her to Joseph.

It was enough—the heavens accepted the sacrifice. The will for the deed was taken, and “accounted unto him for righteousness.” Joseph wept at this proof of devotion, and embracing Heber, told him that was all that the Lord required. He had proved him. …

The Prophet joined the hands of the heroic and devoted pair, and then and there, by virtue of the sealing power and authority of the Holy Priesthood, Heber and Vilate Kimball were made husband and wife for all eternity.8

Whitney also described what followed afterward: “Heber’s crucial test was in part over. Vilate’s trial was yet to come. The principle of eternal marriage was now known to them so far as their own eternal covenant was concerned, but the doctrine of plurality of wives which it included, was yet to be revealed.”9

Helen Mar Kimball, daughter of Heber and Vilate, provided this account of the ongoing test of faith:

In Nauvoo the Prophet’s life was in constant jeopardy, not only from outside influences and enemies, who were seeking some plea to take him back to Missouri, but from false brethren, who had crept into his bosom and then betrayed him. Therefore, when he told my father to take a second wife, he requested him to keep it a secret and not divulge it even to my mother, for fear that she would not receive the principle. Father realized the situation fully, and the love and reverence he felt for the Prophet was so great that he would rather have laid down his own life than have betrayed him. This was the greatest test of his faith he had ever experienced.

When first hearing the principle taught, believing that he would be called upon to enter into it, he thought of two Sisters Pitkin, who, as they were both elderly ladies and great friends of my mother’s, he believed would cause her little if any unhappiness. The woman he was commanded [by the Prophet] to take, however, was an English lady nearer my mother’s age. … The thought of deceiving the kind and faithful wife of his youth, whom he loved with all his heart, and who with him had borne so patiently their separation and all the trials and sacrifices they had been called to endure, was more than he felt able to bear. He realized not only the additional of trouble and perplexities that such a step must bring upon him, but his sorrow and misery were increased by the thought of my mother hearing of it from some other source which would no doubt separate them forever, and he shrank from the thought of such a thing, or of causing her any unhappiness. Finally he was so tried that he went to Joseph and told him how he felt – that he was fearful if he took such a step he could not stand, but would be overcome. The Prophet went and inquired of the Lord; His answer was: “Tell him to go and do as he has been commanded, and if I see that there is any danger of his apostatizing, I will take him to myself.”

Father was heard many a time to say that he had shed bushels of tears over this order, the order of “celestial or plural marriage.”

The Prophet told him the third time before he obeyed the command. This shows that the trial must have been extraordinary, for he was a man who from the first had yielded implicit obedience to every requirement of the Prophet.

My mother had noticed a change in his looks and appearance, and when she enquired the cause he tried to evade her question, saying it was only her imagination, or that he was not feeling well, etc. But it so worked upon his mind that his anxious and haggard looks betrayed him daily and hourly, and finally his misery became so unbearable that it was impossible to control his feelings. He became sick in body, but his mental wretchedness was too great to allow of his retiring at night, and instead of going to bed he would walk the floor; and the agony of his mind was so terrible that he would wring his hands and weep, beseeching the Lord with his whole soul to be merciful and reveal to his wife the cause of his great sorrow, for he himself could not break his vow of secrecy. His anguish, and my mother’s, were indescribable, and when unable to endure it longer, she retired to her room, where, with a broken and contrite heart she poured out her grief to Him who has said: “If any lack wisdom let him ask of God, who giventh to all men liberally and upabraideth not.” “Seek and ye shall find, knock and it shall be opened unto you.”

My father’s heart was raised at the same time in supplication, and while pleading as one would plead for life, the vision of her mind was opened, and as darkness fleeth before the morning sun, so did her sorrow and the groveling things of earth vanish away, and before her she saw the principle of celestial marriage illustrated in all its beauty and glory, together with the great exaltation and honor it would confer upon her in that immortal and celestial sphere if she would but accept it and stand in her place by her husband’s side. She was also shown the woman he had taken to wife, and contemplated with joy the vast and boundless love and union which this order would bring about, as well as the increase of kingdoms, power and glory extending throughout the eternities, worlds without end.

Her soul was satisfied and filled with the Spirit of God. With a countenance beaming with joy she returned to my father, saying, “Heber, what you kept from me the Lord has shown to me.”

She related the scene to me and to many others, and told me she never saw so happy a man as father was, when she described the vision and told him she was satisfied and knew that it was from God.10

Vilate believed that the revelation was from God, but she continued to struggle emotionally with polygamy for the rest of her life.

To continue this brief narrative of the unfolding of the practice of polygamy in The Church of Jesus Christ of Latter-day Saints, proceed to the section on John C. Bennett’s Spiritual Wifery.