John C. Bennett arrived in Nauvoo in September of 1840 and stayed less than two years. In spite of his relatively brief time living among the Saints, he impacted the secret expansion of plural marriage in several ways. 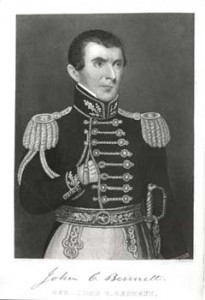 Although gifted in many areas, Bennett had a troubling hidden past. Historian Linda King Newell provided this pithy observation: “There is no evidence that Bennett was hampered by either theological or ethical considerations.”1 By mid-February 1841, Joseph Smith sent George Miller to McConnelsville, Ohio, to investigate rumors about his reputation.2

Four weeks later Miller reported back that Bennett, who had been passing himself off as a bachelor, was already married and that “his poor, but confiding wife, followed him from place to place, with no suspicion of his unfaithfulness to her; at length, however, he became so bold in his departures, that it was evident to all around that he was a sore offender, and his wife left him under satisfactory evidence of his adulterous connections.”3

Having been the focus of numerous rumors himself, Joseph did not immediately expose Bennett. Perhaps hoping that church affiliation might assist Bennett’s redirection, Joseph supported his election as Nauvoo’s first mayor and even asked him to serve as an “assistant” to the First Presidency. It appears that this surprising advancement was the result of Bennett’s immoral antics being privately discovered, and then, after promising to reform, Bennett received another chance to regain Joseph’s trust.4

Despite the importance of his position, Bennett appears to have officiated at few public religious activities. He occasionally preached, and as mayor of Nauvoo he performed a few [civil] marriage ceremonies. He did serve as president pro tem in a special conference held on April 6, 1842, but otherwise he played little role in church conferences.5

Because of the public relationship between Joseph Smith and Bennett, multiple authors have concluded that Bennett was privy to Joseph’s plural marriage teachings.6 However, Bennett later denied learning about “marrying for eternity,” monogamously or polygamously, while in Nauvoo. In a letter to the Iowa Hawk Eye published December 7, 1843, he claimed that eternal marriage was “an entirely new doctrine” to him.7 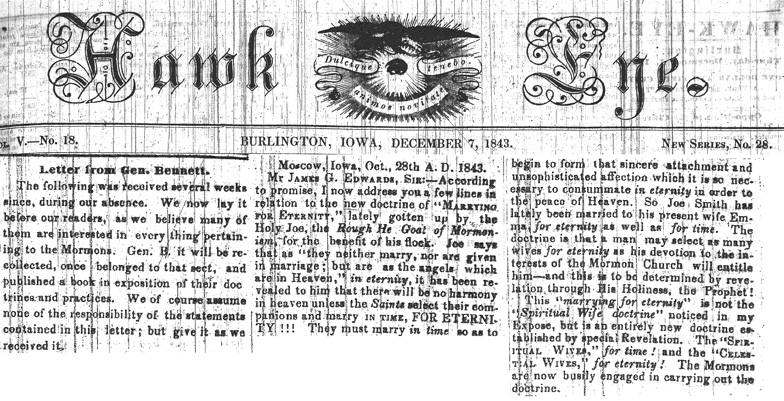 In contrast, Andrew F. Smith noted: “No primary evidence has been presented indicating that Bennett was officially involved in the evolving practice of polygamy at Nauvoo. … No evidence indicates that Bennett’s extramarital relationships were sanctioned by Joseph Smith.”8

Whatever early repentance Bennett may have initially manifested, his personal behavior throughout most of 1841 and early 1842 shows that he did not follow through. In clandestine circles, he whispered teachings of “spiritual wifery,” which allowed any man and woman to experience sexual relations without a marriage ceremony, so long as they kept it secret. Bennett soon had a number of gullible men and women convinced his teachings were acceptable.

In May of 1841, he approached church member Catherine Fuller privately with an illicit sex proposal only a week after they first met. On May 25, 1842, she testified that Bennett “seduced me”:

Nearly a year ago I became acquainted with John C. Bennett, after visiting twice and on the third time he proposed unlawful intercourse being about one week after first acquaintance. He said he wished his desires granted. I told him it was contrary to my feelings he assured me there was others in higher standing than I was who would conduct in that way and there was no harm in it. He said there should be no sin upon me if there was any sin[,] it should come upon himself. … John C. Bennett was the first man that seduced me—no man ever made the attempt before him.9

Whether Joseph Smith was aware of this seduction is unknown. However, Bennett’s immoralities apparently reached the Prophet’s ears weeks later. In 1842, L. D. Wasson, Emma Smith’s nephew, wrote to him:

I was reading in your [Joseph Smith’s] chamber last summer [1841] – yourself and Bennett came into the lower room, and I heard you give J. C. Bennett a tremendous flagellation for practicing iniquity under the base pretense of authority from the heads of the Church – If you recollect I came down just before you were through talking.10

Bennett’s lasciviousness resurfaced early in 1842, but Joseph was still reticent to expose him.

Apparently, Joseph Smith exercised extreme patience with John C. Bennett. Concerning forgiveness, the Prophet taught the Relief Society in May, 1842: “[They] are fellow mortals, we loved them once, shall we not encourage them to reformation? We have not yet forgiven them seventy times seven, as our Savior directed; perhaps we have not forgiven them once. There is now a day of salvation to such as repent and reform;—and they who repent not should be cast out from this society; yet we should woo them to return to God, lest they escape not the damnation of hell!”11

By the late spring of 1842, it was obvious that the mayor was not going to change his immoral conduct. When finally confronted, “he said he had seduced six or seven” women in the city “and said if he was forgiven, he would not be guilty any more.”12  However, Bennett’s improprieties could no longer be ignored. He resigned as mayor on May 17 and was disfellowshipped.13  That day he signed a public confession:

Personally appeared before me, Daniel H. Wells, an Alderman of said city of Nauvoo, John C. Bennett, who being duly sworn according to law, deposeth and saith:  that he never was taught any thing in the least contrary to the strictest principles of the Gospel, or of virtue, or of the laws of God, or man, under any circumstances, or upon any occasion either directly or indirectly, in word or  deed, by Joseph Smith; and that he never knew the said Smith to countenance any improper conduct whatever, either in public or private; and that he never did teach to me in private that an illegal illicit intercourse with females was, under any circumstances, justifiable, and that I never knew him so to teach others.14

Joseph later complained: “The only sin I ever committed was in exercising sympathy and covering up their [John C. Bennett and others’] iniquities, on their solemn promise to reform, and of this I am ashamed, and will never do so again.”15 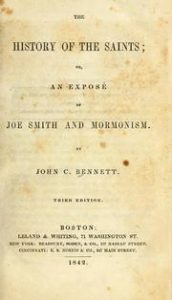 During Bennett’s twenty-two-month stay in Nauvoo, he experienced a meteoric rise in power that was matched in speed only by his fall from grace, which was primarily due to his womanizing behaviors.

John C. Bennett on the Attack

Had John C. Bennett quietly exited Nauvoo, leaving the flurry of accusations to fade through the passage of time, the remainder of Joseph Smith’s life might have been dramatically altered. Bennett, however, was not inclined to walk away from a fight. In addition, he was intelligent and gifted in many areas, with established ties to publishers and politicians in the East. Months later, he wrote: “He [Joseph Smith] has awakened the wrong passenger … and must suffer.”16

His written onslaught consisted of six letters to the Sangamo Journal in Springfield, Illinois, penned between July 8 and August 19, followed by an exposé titled The History of the Saints.17 Andrew F. Smith assessed: “Although the book was almost 350 pages, four-fifths consisted of material previously written.”18

In his publications, Bennett’s depiction of the practice and teachings of polygamy in Nauvoo were remarkable and over-the-top. The weaknesses were not lost on anti-Mormon authors. T. B. H. Stenhouse cautioned: “No statement that he makes can be received with confidence.”19

Joseph Smith tried to neutralize John C. Bennett’s charges in several ways, including plain denials. Missionaries were also dispatched specifically to counteract his claims against the church. Henry William Bigler recalled: “In the month of August [1842] at a special conference, a goodly number of elders were called to go on missions and to rebuke John Bennett’s lies, among the number I was called.”20

The problem they encountered stemmed from the willingness of readers to believe Bennett’s claims simply because of his geographic closeness to the Latter-day Saints and church leaders. This is understandable and gave the former mayor a pulpit from which he could effectively criticize Joseph Smith.

While in Nauvoo, Bennett had heard rumors of polygamy and had apparently spoken with some insiders concerning the practice. Exploiting this kernel of truth, Bennett described three fictitious “orders” of polygamous wives with participants wearing different colored veils (white, green and black), each bringing its own immoral obligations.21 Nauvoo pluralists knew these descriptions were pure fabrication, but others, even some uninformed church members, were confused. Critics today sometimes exploit this confusion, making claims that go beyond the evidence regarding Bennett’s documentable knowledge of Joseph Smith’s celestial marriage teachings in the early 1840s.

To continue this brief narrative of the unfolding of the practice of polygamy in The Church of Jesus Christ of Latter-day Saints, proceed to the section on Emma Smith Struggles.