Joseph Smith was sealed to fourteen women with legal spouses. These are some of the most puzzling of all of his plural marriages. From a ceremonial standpoint, it appears that these women had two husbands at the same time. If that were true, it would be called “polyandry” or “a plurality of husbands,” a nearly unprecedented marital dynamic.

As odd as these arrangements seem to us today, it is important to note that there is no unambiguous evidence indicating that Joseph ever treated these women as wives or sexual partners.

In Nauvoo, plural marriage ceremonies could be for different durations. That is, a woman could be sealed to a man for this life and the next, called “time-and-eternity,” or a sealing could be just for after death, called “eternity-only.” 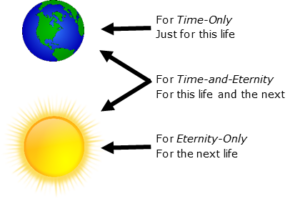 Andrew Jenson, who became an Assistant Church Historian in the 1890s, described an eternity-only sealing in his notes as he was interviewing an unidentified Nauvoo polygamist (likely Eliza R. Snow or Malissa Lott) in 1887:

While there the strongest affection sprang up between the Prophet Joseph and Mr. Sayers.2 The latter not attaching much importance to the/ theory of a future life insisted that his wife Ruth/ should be sealed to the Prophet for eternity, as he himself should only claim her in this life. She was/ accordingly the sealed to the Prophet in Emma Smith’s presence and thus were became numbered among the Prophets plural wives. She however though she/ continued to live with Mr. Sayers / remained with her husband until his death.3 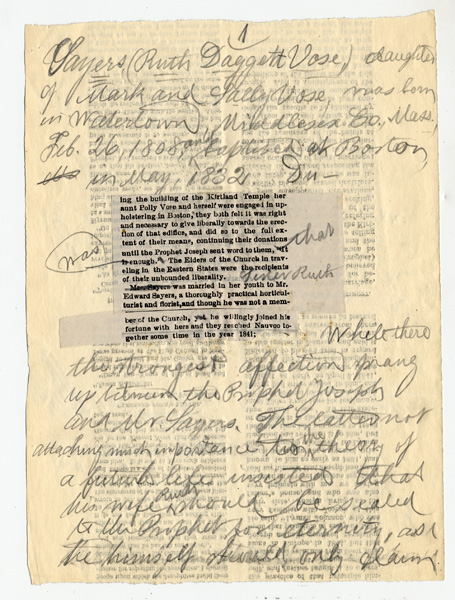 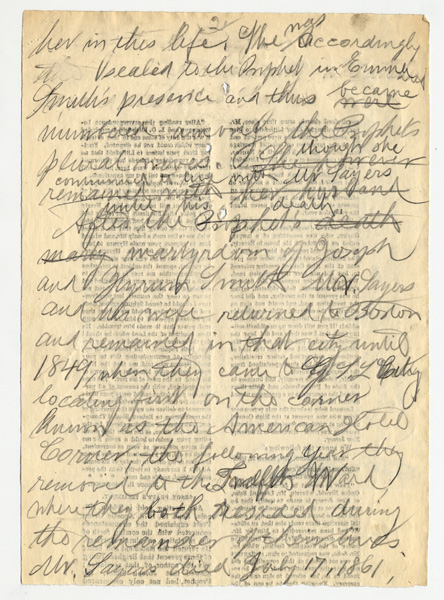 Joseph’s sealings to legally married women seem to have been of this type — eternity-only. That is, they did not constitute marriages during this life but applied only in eternity (after death). The participants themselves referred to them as marriages, which confuses the issue further even though the relationships were ceremonial in matrimonial nature only.

It is true that little is known regarding Joseph’s actual involvement with many of the fourteen women. This lack of evidence is sometimes exploited by critics who wish to fill in the gaps with allegations that sexuality occurred in both relationships, charging that the Prophet entered into one or more genuine polyandrous relationships.

The lack of solid documentation is important because demonstrating the existence of a plurality of husbands could be done rather easily by quoting a single credible supportive statement if such existed. One well-documented account from a participant or other close observer (of which there were dozens) indicating that any of the fourteen women had two genuine husbands at the same time would constitute such evidence. No documentation of this type has been found.

Similarly, no declarations from other polygamy insiders have been found saying Joseph taught polyandry was acceptable. No credible accounts from any of the fourteen wives exist wherein they complained about it, even though many complaints about polygamy are recorded.

More remarkable is the lack of defenses of the practice. Dozens of people were aware of some of these eternity-only sealings. That no explanatory texts or defensive references have surfaced is surprising.

The absence of any unambiguous evidence of a plurality of husbands contrasts the abundance of solid evidence establishing the practice of traditional polygamy (plurality of wives) called “polygyny”:

A Plurality of Husbands Would Have Been an Explosive Practice

Nothing has been more controversial in the history of the  Church of Jesus Christ of Latter-day Saints than the practice of polygamy. As soon as it became known, printing presses blasted the news across the continent, Christians around the world took offense, Congress labeled it a “relic of barbarism,” and a stigma arose that remains to this day.

If Joseph Smith had practiced a plurality of husbands, it seems the push-back would have been at least as great, if not greater.

Polyandry is distinctly different from traditional polygamy because it involves a legal husband. No American law recognized the sealings as creating a genuine polygamous marriage. So if sexuality was involved in any of the sealings, the standard of frontier justice generally allowed the husband, or a father, brother, or son of a sexually involved woman to exact revenge, even mortal justice, upon the perpetrator.

Several of the legal husbands were not active Latter-day Saints, so Joseph’s personal safety could easily have been threatened. The possible involvement of the husbands of the wives sealed to him would probably have increased the potential for public scandal from a plurality of husbands beyond that from accusations of multiple wives. 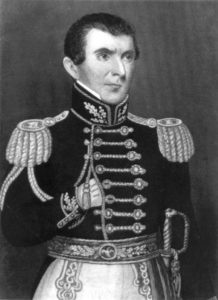 During his lifetime, even Joseph Smith’s enemies failed to exploit the charge. After his excommunication, John C. Bennett identified several of Joseph’s plural wives in his 1842 publication, History of the Saints. Calling them “spiritual wives.”4 Yet, Bennett never accused Joseph of genuine polyandry. Nor did he invite the husbands of the women he listed to join with him in persecuting Joseph, even though he had appealed to many others to do so.5

Similarly, William Law, who was a polygamy insider in Nauvoo, apostatized and went to Carthage on May 23, 1844, to charge Joseph Smith with adultery with one of his previously unmarried plural wives, Maria Lawrence. Law undoubtedly knew of Joseph’s sealings to legally married women, but he ignored the chance to accuse him of practicing polyandry.

That Joseph’s enemies failed to exploit these particular sealings in their crusades against Joseph Smith is puzzling. Their scandal-mongering missed an excellent opportunity unless they knew the sealings were only for the next life. No one made the accusation that Joseph Smith practiced genuine polyandry until several years after his death, and then the accusations were made by non-members who were not privy to details of the Nauvoo sealings.6 The lack of a prominent reaction (by critics) raises doubts regarding the existence of the accused action (polyandry).

Among Latter-day Saints the practice would have been equally controversial. The revelation on celestial and plural marriage, now section 132 in the Doctrine and Covenants, contains three references to sexually polyandrous relations.7 All three label them “adultery,” with two cases stating the woman involved “would be destroyed.”8

Church members who were personally taught by Joseph recalled only condemnations of the practice. For example, when asked in 1852, “What do you think of a woman having more husbands than one?” Brigham Young answered, “This is not known to the law.”9

The following year Orson Pratt instructed: “God has strictly forbidden, in this Bible, plurality of husbands, and proclaimed against it in his law.”10 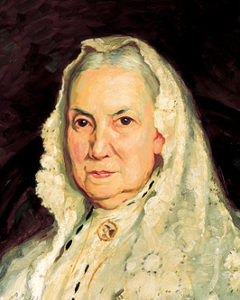 His wife Bathsheba Smith, who served as Relief Society General President, was asked in 1892 if it would “be a violation of the laws of the church for one woman to have two husbands living at the same time.” She replied: “I think it would.”12

Similar denunciations continued as First Presidency Counselor Joseph F. Smith wrote in 1889: “Polyandry is wrong, physiologically, morally, and from a scriptural point of order. It is nowhere sanctioned in the Bible, nor by the law of God or nature and has no affinity with ‘Mormon’ plural marriage.”13

Joseph Smith’s sealings to legally married women may still seem rather odd. Observers may take solace that none of the civil couples tied to this union left any public complaints against Joseph for the arrangements.

This factor alone may give readers consolation regarding these sealings to legally married women.

To continue this brief narrative of the unfolding of the practice of polygamy in The Church of Jesus Christ of Latter-day Saints, proceed to the section on Sealings to Young Brides.