Sometime in 1840 Joseph Smith first secretly broached the topic of plural marriage to trusted friends. Most of the apostles were in England at this time, so they were not amongst this select group.

Church member Cyrus Wheelock remembered some of the earliest teaching from the Prophet regarding polygamy that occurred in 1840: “The first time I recollect hearing him [Joseph Smith] teach was in Iowa, at a place called Montrose. It was at Montrose in Iowa at the house of one [Joseph] Bates Noble.”1

Wheelock also recalled a second discussion on the topic led by the Prophet on a “rainy and chilly” day in a forest setting about a mile west of Montrose:

Joseph had to be on the run to keep out of the way of his enemies, and some times …  we would go out in the timber to talk under the trees about the principles of the church, amongst other principles that of baptism for the dead was discussed and the building of the temple and all those things together. It was at this time, amongst others, that he taught us the principle of plural marriage, but his teaching was not specially directed to me, but to all who were in the company. We talked about it as we might here or any brother qualified and having authority to do so will discuss principles when he gets along with his brethren in friend and confidential discourse.2

In addition, Wheelock testified in 1869: “In the fall of the year A.D. 1840 Joseph Smith, taught him the principle of Celestial marriage or a ‘plurality of wives,’ and that the said Joseph Smith declared that he had received a revelation from God on the subject and that the angel of the Lord had commanded him, (Joseph Smith) to move forward in the said order of marriage, and further, that the said Joseph Smith, requested him, (Joseph Bates Noble) to step forward and assist him in carrying out the Said principle.”3

As the Prophet taught in Joseph B. Noble’s home in Montrose, Iowa, the audience included members of Joseph Noble’s family and his wife’s sister, Louisa Beaman.4 The Noble clan embraced the instructions, and Louisa accepted a plural marriage proposal from the Prophet.5

Noble left multiple records referring to the marriage of Louisa to Joseph. In 1869, he signed an affidavit affirming “that, on the fifth day of April A.D. 1841, At the City of Nauvoo, County of Hancock, State of Illinois, he married or sealed Louisa Beaman, to Joseph Smith.”6 In 1892, when asked about the authority he used to seal Louisa Beaman to Joseph Smith, Noble stated with a hint of pride: “I know this, that the law giver [Joseph Smith] authorized it. … I got it all right — right from the Prophet himself. That is where I got it. … I sealed her to him and I did a good job too.”7 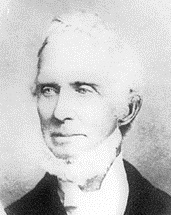 Noble remarked in an 1883 Stake Conference: “Elder Noble sealed his wife’s sister to Joseph, that being the first plural marriage consummated [performed]. The Prophet gave the form of the ceremony, Elder Noble repeating the words after him. Elder Noble bore testimony to the purity of character of his sister-in-law, who was a woman of irreproachable morality, who entered into the plural marriage relation on a deep-seated conviction that the doctrine was from God.”8

George F. Richards recorded in his journal that “Brother Nobles also testified that he sealed to Joseph a relative of his own & that it was the first ceremony of the plural marriage performed in this dispensation and that it was done in a whisper.”9 Reliable evidence exists supporting that this was a time-and-eternity sealing with sexual relations.10

Months passed before Joseph was sealed to his next plural wife, Zina Huntington, on October 27, 1841. It is possible that up to ten out of the next eleven plural proposals were to legally married women.

These plural sealings appear to have been for eternity-only, meaning a sealing only for the next life with no marriage (or sexual relations) on earth.

These marriages are befuddling, but they may have been fueled by Joseph’s affection for Emma.

Non-Latter-day Saint Historian Lawrence Foster noted: “The introduction of polygamy was complicated by the deep affection that Emma and Joseph had for each other, a bond which is unmistakably revealed in their personal letters. Emma was jealously devoted to Joseph. He, in turn, showed great love for her. The deep attachment between them must have made the introduction of plural marriage particularly painful.”11

Even though he had secretly been sealed to over a dozen women by August 16, 1842, Joseph Smith then reflected in his journal upon his love for Emma:

With what unspeakable delight, and what transports of joy swelled my bosom, when I took by the hand on that night, my beloved Emma, she that was my wife, even the wife of my youth; and the choice of my heart. Many were the reviberations of my mind when I contemplated for a moment the many past scenes we had been called to pass through. The fatigues, and the toils, the sorrows, and sufferings, and the joys and consolations from time to time [which] had strewed our paths and crowned our board. Oh! What a co-mingling of thought filled my mind for the moment, again she is here, even in the seventh trouble, undaunted, firm and unwavering, unchangeable, affectionate Emma.12

Joseph apparently succeeded in loving his plural wives; none of them ever complained he had abused them or treated them as objects or chattel. Nevertheless, it is plain that in his heart, Emma held a unique place.

Toward the end of 1841, three changes can be detected in Joseph Smith’s strategy for unfolding the practice of polygamy in Nauvoo.

First, even though the Prophet had informed several members of the Quorum of the Twelve Apostles regarding restored polygamy after they returned from England in the previous summer (of 1841), none had yet married plural wives. Toward the end of the year and with Joseph’s approval, Brigham Young proposed plural marriage to Martha Brotherton, and in early 1842 Heber C. Kimball apparently married his first plural wife.13

The second change, which occurred in April, came as Joseph Smith switched from contracting eternity-only sealings to legally married women and proposed to a previously unmarried woman, only the second such proposal by him in Nauvoo. 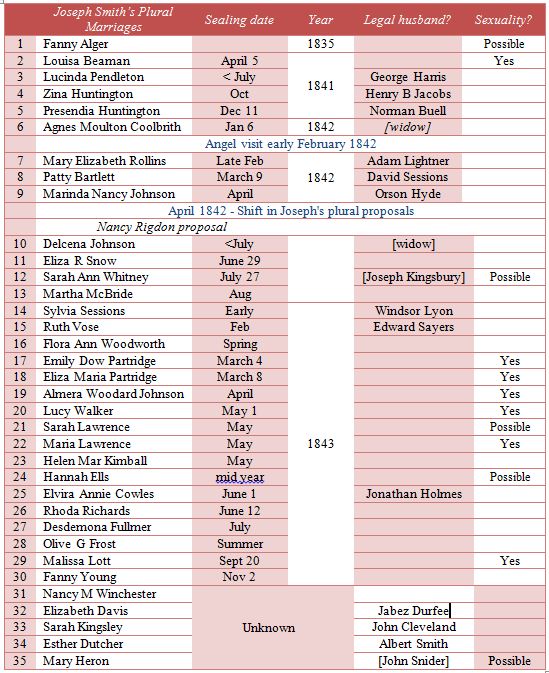 Third, from this time forward, conjugal relations in some of Joseph Smith’s plural unions are well documented—sometimes by the plural wives themselves (for example, Malissa Lott and Emily Partridge) or from reliable secondhand sources (as in the cases of Louisa Beaman, Lucy Walker, Almera Woodard Johnson, and Eliza Partridge).14

The unmarried woman Joseph approached was Nancy Rigdon, the nineteen-year-old daughter of his First Counselor in the First Presidency, Sidney Rigdon. The proposal turned out badly. Nancy’s brother J. Wickliffe Rigdon, who late in life became a Latter-day Saint, recalled the incident:

It happened in this way: Nancy had gone to Church meeting being held in a grove near the temple lot on which the “Mormons” were then erecting a temple, an old lady friend [Marinda Johnson Hyde] who lived alone invited her, which Nancy did. When they got to the house and had taken their bonnets off, the old lady began to talk to her about the new doctrine of polygamy which was then being taught, telling Nancy, during the conversation, that it was a surprise to her when she first heard it, but that she had since come to believe it to be true.

While they were talking Joseph Smith the Prophet came into the house and joined them, and the old lady immediately left the room. It was then that Joseph made the proposal of marriage to my sister. Nancy flatly refused him, saying if she ever got married she would marry a single man or none at all, and thereupon took her bonnet and went home, leaving Joseph at the old lady’s home.15

Apparently, in an attempt to propose plural marriage to her, the Prophet dictated a letter to her containing doctrinal teachings that was published by excommunicated member John C. Bennett:

Happiness is the object and design of our existence; and will be the end thereof, if we pursue the path that leads to it; and this path is virtue, uprightness, faithfulness, holiness, and keeping all the commandments of God. But we cannot keep all the commandments without first knowing them, and we cannot expect to know all, or more than we now know unless we comply with or keep those we have already received. That which is wrong under one circumstance, may be, and often is, right under another. …

Into eternity. Our heavenly Father is more liberal in His views, and boundless in His mercies and blessings, than we are ready to believe or receive; and, at the same time, is more terrible to the workers of iniquity, more awful in the executions of His punishments, and more ready to detect every false way, than we are apt to suppose Him to be. He will be inquired of by his children – he says, ask and ye shall receive, seek and ye shall find;” but, if you will take that which is not your own, or which I have not given you, you shall be rewarded according to your deeds; but no good thing will I withhold from them who walk uprightly before me, and do my will in all things — who will listen to my voice and to the voice of my servant whom I have sent; for I delight in those who seek diligently to know my precepts, and abide by the law of my kingdom; for all things shall be made known unto them in mine own due time, and in the end they shall have joy.16 (Emphasis—of unknown significance—is reproduced as in Bennett’s published version.)

While some researchers may question whether Joseph Smith was the true author, no other plausible candidate has been proposed.17 None of the other participants in this historical episode possessed the motivation to write or the teaching style employed in the letter. Also, it is apparent that all of the doctrinal ideas voiced in the narrative can be found in the Prophet’s other instructions.18

Nancy told father and mother of it. The story got out and it became the talk of the town that Joseph had made a proposition to Nancy Rigdon to become his wife, and that she refused him. A few days after the occurrence Joseph Smith came to my father’s house and talked the matter over with the family [and] my sister. … The feelings manifested by our family on this occasion were anything but brotherly or sisterly, more especially on the part of Nancy, as she felt that she had been insulted. A day or two later Joseph Smith returned to my father’s house, when matters were satisfactorily adjusted between them and there the matter ended.19

To continue this brief narrative of the unfolding of the practice of polygamy in The Church of Jesus Christ of Latter-day Saints, proceed to the section on Other Church Leaders Practice Polygamy.