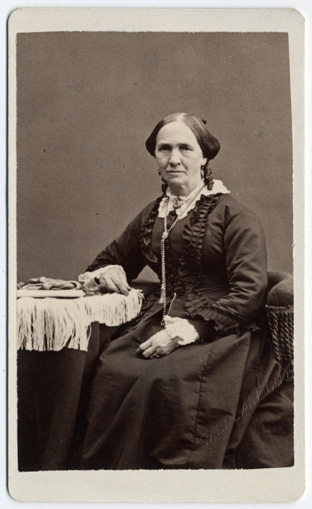 Zina Diantha Huntington was born on January 31, 1821, in Watertown, New York, the fourth of ten children of William Huntington and Zina Baker. While the Huntingtons heard of Joseph Smith in 1831, they did not join the Church until 1835 after they had read the Book of Mormon several times. The following year they moved to Kirtland where they lived until 1838. Thereafter they stayed in Missouri for eleven months and then relocated to Nauvoo.

While Zina and her brothers were living with the Prophet and Emma she met and became engaged to Henry Bailey Jacobs. They asked the Prophet to perform their marriage ceremony which was to be held at the County [sic] Clerk’s office [March 7, 1841]. When the couple arrived the Prophet was not there. After a wait, they decided to ask the clerk, John C. Bennett, if he would perform the marriage, which he did. When the couple later met the Prophet, Zina asked him why he hadn’t come as he had promised. He told her it had been made known to him that she was to be his Celestial Wife and he could not give to another one who had been given to him.1

On May 1, 1869, Zina Huntington signed the following affidavit:

Be it remembered that on this first day of May A.D. eighteen sixty nine before me Elias Smith Probate Judge for Said County personally appeared, Zina Diantha Huntington ^Young^ who was by me Sworn in due form of law, and upon her oath Saith, that on the twenty-Seventh day of October A.D. 1841, at the City of Nauvoo, County of Hancock, State of Illinois, She was married or Sealed to Joseph Smith, President of the Church of Jesus Christ of Latter Day Saints, by Dimick B. Huntington, a High Priest in Said Church, according to the laws of the same; regulating marriage; In the presence of Fanny Maria Huntington.2

When I heard that God had revealed the law of celestial marriag that we would have the privilige of associating in family relationship in the/ worlds to come I searched the scripture & buy [by] humble prayer to my Heavenly Father I obtained a testimony for himself [sic.] that God had required that order to be established in his church. I mad[e] a greater sacrifise than to give my life for I never anticipated a gain to be look uppon as an honerable woman by those I dearly loved [How] could I compremise conscience [and] lay aside the sure testimony of the spiret of God for the Glory of this world[?]”3

Like other eternity-only plural wives, Zina referred to the events and the process that led up to her sealing to the Prophet, but she left no record discussing any special interactions with him after the marriage ceremony.

In an 1898 interview with RLDS Elder John W. Wight, Zina D. Huntington was questioned regarding her relationship with the Prophet.

Q. How, then, could you have been sealed to Joseph Smith without first having heard the doctrine of plural marriage?

A. Joseph Smith sent my brother Dimick to explain it to me.

Q. It is a fact, then, that you were never taught it by Joseph Smith himself?

A. My brother Dimick told me what Joseph had told him. I knew it was from the Lord, and I received it. Joseph did not come until afterward.

Q. You mean by that, then, that after your brother Dimick had returned to Joseph and given him the information that you had accepted such teaching, that Joseph then came to you, prior to having been sealed, and taught you the doctrine of plural marriage?

A. I told you that the Lord had revealed to Joseph Smith that he was to marry me. I received it from Joseph through my brother Dimick.

Q. Who was present at the time that Joseph taught you the doctrine of sealing, besides, yourself and Joseph?

A. My brother Dimick.4

A portion of an 1887 newspaper article based upon an interview with Zina Huntington affirms that she was not Joseph Smith’s first plural wife in Nauvoo: “Louisa Beman, married to the Prophet April 5, 1841 … the first woman of modern times who ventured into polygamy.”5 If Zina’s sealing preceded Louisa, it seems likely that she would have clarified it.6

In addition, in the 1898 interview with RLDS Elder John W. Wight and Zina provided clarifying responses regarding the type of sealing she experienced with the Prophet:

Q. “Then it is a fact, Mrs. [Zina] Young, is it not, that you married Mr. Smith at the same time you were married to Mr. [Henry] Jacobs?”

A. “What right have you to ask such questions? I was sealed to Joseph Smith for eternity.”7

Q. “Mrs. Young, you claim, I believe, that you were not married to him for time?”

A. “For eternity. I was married to Mr. Jacobs, but the marriage was unhappy and we parted.”…

Q. “I presume you are aware of the fact that it is claimed by your church that the marriage with Mr. Jacobs was not an agreeable one.”

Q. “It is a fact then, Mrs. Young, that Joseph was not married to you only in the sense of being sealed for eternity?”

A. “As his wife for time and eternity.”

Q. “Mrs. Young, you have answered that question in two ways; for time, and for time and eternity.”

When the interviewer Wight pointed out the confusion, Zina clarified that her sealing was “for eternity.”9 Critics might assert that Zina was attempting to cover up polyandrous sexual relations. However, Zina was undoubtedly aware that the RLDS interviewer was trying to establish that Joseph Smith did not experience conjugal relations with anyone but Emma, his legal wife. An admission by Zina that her marriage was for “eternity only” and without sexual relations played right into Wight’s hands by providing him with the exact evidence he was seeking. Nonetheless, Zina knew that some of Joseph’s plural marriages were for “time and eternity” and included connubial relations. As a consequence, she may have been reticent to comply with Wight’s designs by providing evidence that might have been used to perpetrate a deception.

Whatever the relationship between Zina and Henry Jacobs during Joseph Smith’s lifetime, it is clear that Zina and Henry were united after the martyrdom since she conceived a son with him on approximately June 30, 1845.

When Henry and Zina attended the Nauvoo Temple on February 2, Henry stood as a witness as Zina was resealed to Joseph Smith for eternity. At this point, a strange thing occurred. Zina, who was seven months pregnant with Henry’s child, was sealed to Brigham Young for time. The motivations for this sealing are unclear. Reportedly, Joseph Smith asked the Twelve to marry his widows to take care of them, but Zina needed no such support as Henry was a dutiful husband.10

Zina’s dissatisfaction with her marriage to Henry may have played a role. She told an interviewer in 1898: “I was married to Mr. Jacobs, but the marriage was unhappy and we parted.”11 She also characterized the union as “a most unhappy and ill-assorted marriage.”12 Whether she had privately met with Brigham Young and requested a separation from Henry is unknown.

Despite her February 2, 1846, temple marriage for time to Brigham, Zina traveled with Henry as they left Nauvoo for the West just five days later. Henry cared for pregnant Zina who delivered their second child, Henry Chariton Jacobs, on March 22 at the crossing of the Chariton River in Iowa. A little over two months later while camped at Mt. Pisgah, Iowa, Brigham Young called Henry on a mission to England, apparently informing him that Zina was no longer his wife and advising him to marry another wife.

Despite these heart-wrenching proceedings, Henry Jacobs remained true to his faith and to Brigham Young, writing to Zina on June 25, less than a month after leaving on his mission: “I do not blame any person … may the Lord our Father Bless Brother Brigham and … tell him for me I have no feelings against him nor never had.”13

Within weeks as a missionary, Henry had proposed to two different women.14 He went on to wed three more times with each union ending in divorce.15

In the wake of her religious divorce from Henry, Zina moved closer to the inner circle of Brigham Young’s plural wives where she was accepted and cared for until arriving in Salt Lake City on September 20, 1848. With Brigham’s help and assistance from her brothers Dimick, Oliver, and William, she was established in a small cabin in the central fort. Zina’s biographers recount the next events:

In early February 1849, Brigham stopped by—apparently unannounced—one Sunday evening, and the two “had a very agreeable veset.” … The next week, on 13 February, Zina for the first time invited Brigham to her home for supper. Zina does not mention seeing her husband again for a month. Then on 15 March Brigham reappeared, and this time, she records briefly, he “stayed the night.” The next day Zina “prepared to move”—evidently as a result of Brigham’s instructions the previous night.16

The following day Zina reflected in her journal: “Many are the reflections of my minde. My Father & mother is not[;] Joseph is not[;] BY [Brigham Young] is very kinde indeed.”17 Regarding this entry, Bradley and Woodward ask: “Why, on the eve of this public change in her marital status, twenty-four hours after what was probably the consummation of her marriage with Brigham Young, does she linger over the fact that her father, mother, and idolized prophet-husband Joseph Smith are dead before reminding herself that Brigham ‘is very kinde indeed’? … Conspicuous by his absence from this list of loved ones is the still-living Henry Jacobs who, by every indication, loved her passionately. Where were her memories of him?”18

Like the experiences of other women with legal husbands, Zina’s plural marriages are odd even by polygamy standards. They are polyandrous in a ceremonial sense, but sexually, they seem to represent consecutive matrimonies to Henry and then Brigham. That her sealing to Joseph Smith was for eternity only and without conjugality or for time and eternity and consummated is undocumented, except for Zina’s one statement in the Wight interview, and will probably never be known. Regardless, there is no evidence of polyandrous sexuality in any of Zina’s marriages.

We remember this day, of all days to us[.] I went into Sister Elizas [Snow]. we talked over our past a little, then Sister E. spoke in tounges to comfort and cheer us, and how the vale was thinning as we advanced I cannot tel but you will feel the spirit of it.

At 3 PM Sister Emily P Young sent over for Susan, and Sister Presendia was there, to be administered [to.] […] we left her resting. I wonder what Joseph will want next to go on with the work in the other Land just so we are prepared all right. I hope she will soon be restored.19

Zina served as the third General President of the Relief Society, set apart on April 8, 1888, and as the first Matron of the Salt Lake Temple in 1893. Eight years later she died firm in the faith she had sacrificed for most of her life.

In an 1895 memoir, she reflected: “I received a testimony for myself from the Lord of this work, and that Joseph Smith was a Prophet of God before I ever saw him, while I resided in the state of New York, given in answer to prayer. I knew him in his lifetime, and know him to have been a great, true man, and a servant of God. … I wish to bear my testimony to the principle of celestial marriage, that it is true.”20