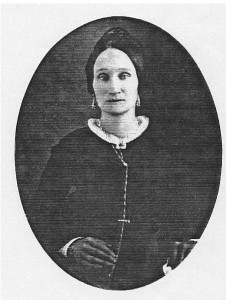 Sylvia Porter Sessions was born on July 31, 1818, in Andover, Maine, to David Sessions and Patty Bartlett Sessions. The family was baptized in 1835 and migrated to Missouri in 1837. There, Sylvia met Windsor Lyon whom she married on April 21, 1838, in a ceremony performed by Joseph Smith. Two years later they had relocated to Nauvoo where she was sealed to the Prophet, probably late 1842 or early 1843.

In the past few decades, researchers have scrutinized Sylvia’s relationship with Joseph Smith, perhaps more than any of his plural marriages. Many review the limited available evidences and assume that her daughter Josephine Lyon was fathered by Joseph Smith. In fact, Brian Hales was largely convinced this was the case until recently.1

Josephine Lyon was born February 8, 1844, which correlates with a conception date of approximately May 18, 1843, if she were full term. In 2016, Dr. Ugo Perego shared the results of his painstaking analysis of DNA data showing Windsor was Josephine’s father.2 For many, this was not the expected result, but it makes it easier to understand Joseph’s sealings to legally married women. (See What can DNA testing tell us about Joseph Smith’s plural marriages? or Josephine Lyon’s Paternity Verified by DNA.)

The 2016 DNA evidence supports that Windsor was the only husband with whom Sylvia experienced conjugality in Nauvoo and that her sealing to Joseph was a non-sexual, eternity-only relationship like that of Ruth Vose Sayers, who was to be Joseph’s wife only after death.3 Despite this indisputable finding, the issue is not settled and probably never will be.

The primary evidence for possible sexuality is a document that recounts how shortly before her 1882 death, Sylvia called Josephine to her side. Josephine reported in 1915: “She then told me that I was the daughter of the Prophet Joseph Smith.”4 Generally, this language would be interpreted to mean physical paternity. However, an eternity-only sealing between Sylvia and Joseph would have made Josephine his daughter in a spiritual sense automatically, since she was born-in-the-covenant of that sealing. Also, within the Church starting with the 1877 dedication of the St. George Temple, proxy sealings as vicarious adoption ordinances were creating fathers and daughters among individuals with no physical kinship relationship.5

While not always reliable, family history records indicate that another daughter, Phebe Clark, was also present and was told the same thing. Phebe was born to Sylvia Sessions after Windsor died and she remarried to Ezekiel Clark. So in Phebe’s case, it could only have been a spiritual relationship supporting that Josephine’s kinship as a “daughter” was also spiritual, not secondary to physical union.

For this and other reasons, several researchers have written that the language is too ambiguous to draw strict conclusions. Author Rex E. Cooper declared: “I find the evidence to be less convincing.”6 Other scholars have agreed.7

Additional supportive evidence comes from a letter from Joseph Smith III, to RLDS leader E. C. Brand in 1894. “She [Sylvia] may have been sealed, but her testimony to E. C. Briggs gives the case away as to children by Joseph Smith. If my memory serves me right she was childless in Nauvoo.”8

President Smith then added: “Mountainous air and some vigorous proxy may have done for Joseph what he did not for himself—less the enjoyment of course—Bah!”9 I have not been able to locate any notes from an interview between E. C. Higgs and Sylvia Sessions, but Joseph Smith III concluded that Sylvia’s comments precluded any children being born as a result of her relationship with the Prophet.10

Contrasting this view are rumors that Josephine was the physical offspring of Joseph Smith. In 1888, George Brimhall recorded in his journal:  “Went to Spanish Fork …  Evening had a talk with Father Hales, who told me that it was said that Joseph Smith had a daughter named Josephine living in Bountiful, Utah.”11  At that time, Josephine Lyon lived in Bountiful with her husband Mr. Fisher.

Similarly, Stake President Angus Cannon told Joseph Smith III in 1905: “I will now refer you to one case where it was said by the girl’s grandmother that your father [Joseph Smith] has a daughter born of a plural wife.  The girl’s grandmother was Mother Sessions, who lived in Nauvoo and died here in the valley.  She was the grand-daughter of Mother Sessions.  That girl, I believe, is living today in Bountiful, north of this city.’”12

It is likely that Sylvia’s relationship with Joseph Smith will always be controversial primarily due to the limited number of available evidences that reflect ambiguities and apparent contradictions. While details are missing, it is certain that there is no theological or historical context for claims of Nauvoo polyandry. As discussed in the essay on Joseph’s sealings to legally married women, several observations support that polyandry did not occur with Sylvia specifically, or with Joseph and other women.