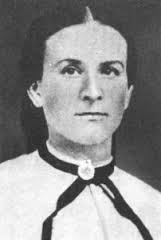 Sarah Kingsley was born October 20, 1788, in Becket, Massachusetts, the second child of Ebenezer Kingsley and Sarah Chaplin. On June 10, 1826, the once-widowed Sarah married John Cleveland, who followed Emanuel Swedenborg and was not interested when Sarah joined the Church in 1835.

The following year the Clevelands moved to Quincy, Illinois, and warmly received many of the Saints as they were exiled from Missouri in 1838–1839.

Upon being driven from Missouri in 1838, Emma Smith and her children resided with Sarah and her husband in Quincy Illinois, while Joseph was incarcerated in the Liberty Jail.

On May 24, 1839, Joseph wrote a letter to Judge John Cleveland and Sarah whom he had never met. It read: “We have selected a lot [in Nauvoo] for you, just across the street from our own, besides Mr. [George W.] Harris.”1

A letter from John L. Smith, Sarah Kingsley’s son-in-law, to the First Presidency, dated March 8, 1895, states: “In the days of Joseph. Mother [Sarah M. Kingsley (Howe)] Cleveland by advice, was sealed to the prophet in Nauvoo but lived with her [non-LDS] husband John Cleveland.”2 Sarah was also resealed to Joseph Smith vicariously in the Nauvoo Temple in 1846.3 This sealing is consistent with an eternity-only ceremony; however, the dating is unknown.

Be it rem^em^bered that on this Seventh day of June A.D. 1869, personally appeared before me, James Jack, a notary public in and for Said county Eliza Roxcy Snow ^Smith^ who was by me Sworn in due form of law and upon her oath Saith, that on the twenty-ninth day of June A.D. 1842, at the City of Nauvoo, county of Hancock, State of Illinois, She was married or Sealed to Joseph Smith, President of the Church of Jesus Christ of Latter Day Saints, by Brigham Young, President of the Quorum of the Twelve Apostles of Said Church, according to the laws of the Same regulating marriage, in the presence of Sarah M. Cleaveland.4

The fact that Sarah was allowed to view Eliza R. Snow’s June 29, 1842, sealing ceremony to Joseph Smith is evidence that she was at that time a polygamy insider. Whether it signifies that she had also been sealed to the Prophet by that time is less clear.

Andrew Jenson recorded that Ruth Vose Sayers was “sealed to the Prophet for eternity … in Emma Smith’s presence.”5 Ruth signed an affidavit on May 1, 1869, saying the sealing occurred in “February A. D. 1843” and was performed by Hyrum Smith.6 The timeline is complicated by the fact that Hyrum did not accept plural marriage until several months later on May 26, 1843.7 Regardless, Jenson noted that Emma Smith was present and apparently approved of Ruth’s sealing to Joseph.

Lucy Meserve Smith remembered that at some point in Nauvoo: “Emma had told me … they [Joseph’s plural wives] were only sealed for eternity [;] they were not to live with them and have children.”8

Sarah Kingsley was married to non-Latter-day Saint John Cleveland who refused to migrate west. When the Latter-day Saints pulled out for the Rocky Mountains, Sarah joined them, leaving her husband behind. However, Church leaders Brigham Young and Heber C. Kimball counseled her to return to John in Illinois.9

Brigham Young and council … counseled her to stay with her husband as he was a good man, having shown himself kind ever helping those in need, although for some reason his mind was darkened as to the gospel. She obeyed council and stayed with her husband, and was faithful and true to her relation and died a faithful member of the Church of Jesus Christ of Latter Day Saints.10

Despite the positive view of Sarah’s biographer, it appears that just prior to her 1856 death, she had joined a revivalist religion. Her son-in-law John L. Smith visited her in mid-1855 and recorded:

Mother had joined a Church a couple of weeks before my arrival I bore my testimony to her she seemed to have forgotten what her feelings were once.

Father Cleveland treated me with more respect than ever before & seemed/ greatly pleased to see me, asked me to pray & ask the blessing regularly while I was there, saying John you know we never pray but I wish you to pray with us.11

John L. Smith’s journal entry may have been too pessimistic. Todd Compton observed: “Without a support group of Mormons, it would have been difficult to live as a Latter-day Saint in ‘gentile’ Illinois, and Sarah always needed a religious social community in her life. Nevertheless, some aspects of her Mormon component were probably so deep that her outward membership in a local Protestant congregation may not have changed it significantly.”12