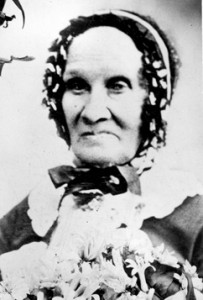 Patty Bartlett was born on February 4, 1795, to Enoch Bartlett and Anna Hall in Bethel, Maine. She married David Sessions on June 28, 1812. In August 1833, Patty was introduced to the restored gospel and according to her son, “As soon as my Mother herd she believed” and was baptized on July 2, 1834.1 The family moved to Missouri in 1837 and then on to Nauvoo, Illinois, three years later.

Patty Bartlett was sealed to Joseph Smith on March 9, 1842. A June 1860 handwritten entry in the diary of Patty Sessions reported she was sealed “for eternity”:

Patty Bartlett daughter of Enoch and Anne Bartlett was born February 4 1795 Bethel Mane/ and was married to David Session June 28th 1812 who was the son of David and Rachel Sessions, he was born April the 4th 1790 Veshire Vermont I was Batpised into the church of Jesus Christ of later day saints/ July 2 1834 Mr Sessions was Baptised Aug <st> 1735 we received our we received our endowment Dec 16 1845 in Nauvoo. …

I was sealed to Joseph Smith by Willard Richards March 9 1842 in Newel K Whitneys chamber Nauvoo for Eternity and I and if I do not live to attend to it myself when there is a place prepared I want some one to attend to it for me according to order Sylvia my daughter/ was present when I was sealed to Joseph Smith.I was after Mr. Sessions death sealed to John Parry senior for time on the 27 of March 1852 G[reat] S[alt] L. City.2

In this entry Patty states that she was sealed for eternity to Joseph Smith. This is similar to the language found in other eternity-only sealings.3 Seven years later, Patty signed an affidavit providing much of the same information:

I Patty Bartlett daughter of Enoch and Anna Bartlett was born February 4th 1795 town of Bethel State of Maine[.]I was Baptised into the church of Jesus Christ of Latter Saints July 2d 1834[. I] was sealed to Joseph Smith the Prophet by Willard Richards March the 9th 1842 in Nauvoo in Newel K Whitneys chamber Sylvia my Daughter was present[.]I received my Endowment in Nauvoo Dec 16 1845. I Never was sealed at the alter to any one.

David and Patty Sessions attended the Nauvoo Temple together, receiving their endowments on December 15, 1845, but they were not sealed in marriage. Her original sealing to Joseph was not performed in the temple because the Nauvoo Temple was not yet completed. Apparently, all marriage sealings performed outside of a temple need to be performed again (in person or by proxy) within a temple edifice in the future.

In 1845–1846, many of Joseph Smith’s plural wives were resealed to him by proxy there. Similarly, in 1899 President Lorenzo Snow instructed Church historians to compile a list of women sealed to Joseph Smith for whom a written temple record was not available. Subsequently, proxy sealings were performed for eleven plural marriages.5

The reason Patty Sessions was not resealed to Joseph Smith by proxy in the Nauvoo Temple is unclear. It is possible that she was unsure of her desires, or perhaps her preference to be the Prophet’s eternal wife, rather than David Session’s, created tension to the degree that the resealing was not then considered.

As of 1867, a repeated proxy sealing had not yet been performed. It appears that just weeks after receiving the affidavit at church headquarters, priesthood leaders invited Patty to be resealed, with Apostle Joseph F. Smith serving vicariously for his Uncle Joseph Smith. Patty’s obituary gives more insight into her rich life:

Sister Sessions drove her own team 1030 miles, arriving in Salt Lake valley on September 28th, 1847. … She has assisted liberally in the building of temples, done much to send the Gospel to the nations of the earth, and gather the poor, has been a strict observer of the Word of Wisdom, not have dunk tea or coffee for over forty years. … She was ever a true and faithful Latter-day Saint, diligent and persevering, her whole soul, and all she possessed being devoted to the Church and the welfare of mankind. She has gone to her grave ripe in years, loved and respected by all who knew her.6