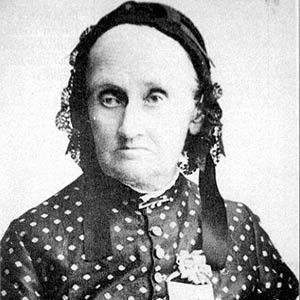 On March 17, 1805, Martha McBride was born in Chester township, New York, the fifth child of Daniel McBride and Abigail Mead McBride. Martha married Vinson Knight on July 26, 1826, and the two were converted in 1834 after meeting the Prophet. They migrated to Kirtland, Ohio, the following year and stayed until the spring of 1838 when they moved to Missouri for less than two years and were established in Nauvoo by October of 1839.

Vinson served as a bishop in Nauvoo and also assisted the Prophet’s own family: “If Bro. Joseph were away, it was he who looked after the wants of his [Joseph’s] family. He was always ready to look after the widows and orphans.”1

Sometime before his untimely July 31, 1842, death, Vinson was sealed to a plural wife. A late secondhand account relates:

Martha [McBride Knight] was told by Joseph Smith that she was the first woman to give her consent for her husband to enter into plural marriage. The story is told that Martha knew something was worrying her husband and he couldn’t seem to tell her about it. One evening as Martha was sitting in the grape arbor behind the house, Vinson returned home carrying a basket. He explained to Martha that he had taken some fruit and vegetables to the widow of Levi N. Merrick,2 whose husband had been killed at Haun’s Mill. Vinson explained to Martha that he had been told to enter plural marriage and that, if he had to, this Sister Merrick would be the one he could help best. Martha’s reply is said to have been, “Is that all.”3

Concerning Vinson’s plural marriage, church member Hyrum Belnap remembered: “At the time/ plural marriage was reviled. There was difficulty to find [sic] Persons that would consent to go into it on the female side. Martha Knight says the Prophet Joseph told her that she was the first one who concented [sic] to her Husband to have an other [sic] wife. and her Husband Vinson Knight did take another woman and was sealed to her. A Mrs Merrick.”4

According to Todd Compton: “We know virtually nothing about what Martha’s and Joseph’s married life was like, and little is known about Martha’s life in Nauvoo from the time of Vinson’s death to Joseph’s.”5 However, Martha McBride Knight signed an 1869 affidavit declaring that “in the summer of the year 1842 at the city of Nauvoo, County of Hancock, State of Illinois, She was married or sealed to Joseph Smith President of the Church of Jesus Christ of Latter-day Saints, by Heber C. Kimble [sic.] one of the Twelve Apostles in said Church according to the law of the same regulating marriage.”6

Martha’s affidavit does not specify whether the sealing to the Prophet in 1842 was just for this life because she was then sealed to Vinson for time and eternity vicariously, or whether she was sealed to Joseph Smith for time and eternity. Regardless, in the Nauvoo temple on January 26, 1846, Martha was sealed for eternity to Joseph Smith (by proxy).

If she had been previously sealed to Vinson, then who should be regarded as her eternal husband is not entirely clear. Even today, a deceased woman is permitted to be sealed by proxy to all the men with whom she lived as a legal wife during mortality (after her husbands are also dead).

Since Martha can be the eternal mate of only one man, it is obvious that some sorting out of these timeless issues will need to occur.7

Sometime after May 23, 1843, Joseph Smith approached Martha in a matchmaking attempt for her daughter, Almira. In 1908, Almira was asked if she had ever received a proposal to be a plural wife:

She looked startled and answered, “Yes and No.” She said, “One day mother and I were in the front room and Joseph Smith came walking down the street and turned in at our gate. I had a hunch and as he entered the front door I went out the back and remained until he left. When I returned my Mother told me that Joseph had come at the request of his brother, Hyrum, to ask me to be his wife. And also asked Mother to ask me, seeing I wasn’t in. So when my mother said, Almira what do you say about it?” I said, “No.”8

Almira refused and soon left the church and married S. B. Stoddard, a bitter anti-Mormon. In 1908 she signed a document that read: “I (Almira K. Hanscom) know that Spiritual marriage, as it was called, was taught by Joseph and Hyrum Smith, when in Nauvoo before they were killed that this Spiritual marriage allowed men to have more than one wife at the same time. I also know, that Emeline and Harritt Page came to me and said this was a hard trial, that they tried to convince me.”9

Martha migrated to Utah with the Saints and in April 1877 attended the dedication of the St. George Temple, where she performed ordinance work for many of her deceased ancestors. On November 20, 1901, she died in Hooper at the home of her daughter Adaline.

Lola Belnap Coolbear, “Vinson Knight—Biographical Sketch,” 54–55. In compilation by Della Belnap titled “Biographies of the Belnap and Knight Families,” copied by BYU library 1958; copy at BYU HBLL Special Collections, Amer BX 8670.1 .B41.
Levi N. Merrick married Philinda Clark Eldrdge on November 18, 1827. He was killed at Hawn’s Mill, Missouri, on October 31, 1838, and Philinda was sealed to Vinson Knight in early 1842. Widowed a second time, she remarried Daniel Keeler on February 6, 1843. The two were endowed in the Nauvoo Temple on January 17, 1846, and sealed by Brigham Young “for time” there on February 6. Current data does not clearly identify to whom she was sealed for eternity.
Brent J. Belnap, “Life Story of Martha McBride Knight Smith Kimball,” Belnap Family Organization, accessed October 25, 2008, http://www.belnapfamily.org/Martha_McBride_Knight_DUP_Biography_(1995).htm. See also Gary James Bergera, “Identifying the Earliest Mormon Polygamists, 1841–1844,” Dialogue 38, no. 3 (Fall 2005): 14.
Hyrum Belnap to Andrew Jenson, Ogden, Utah, 30 December 1899, in Andrew Jenson Collection, MS 17956, Box 9, Fd. 24, page 2.
Compton, In Sacred Loneliness, 371.
Martha McBride, July 8,1869 Affidavit, CHL; digital photo MS 3423. This affidavit was copied in Joseph F. Smith Affidavit Books, 2:36; 3:36. See also Joseph Fielding Smith, Blood Atonement and the Origin of Plural Marriage (Salt Lake City: Deseret News, 1905, 72 (page 86 in 1905 ed.).
President Joseph F. Smith in 1915 taught: “If a man and woman should be joined together who are incompatible to each other it would be a mercy to them to be separated that they might have a chance to find other spirits that will be congenial to them. We may bind on earth and it will be bound in Heaven, and loose on earth and it will be loosed in Heaven.” (James R. Clark, Messages of the First Presidency, 4:330–31.)
Almira Hanscom statement, 1908 in “Autobiography of Hyrum Belnap” From a compilation by Della Belnap titled “Biographies of the Belnap and Knight Families” (typescript), copied by BYU library 1958; copy at BYU HBLL Special Collections—Amer BX 8670.1 .B41. This statement is found on page 55 of whole compilation, or page 20 of Hyrum Belnap Autobiography.
Almira Knight Hanscom, affidavit, July 24, 1908, copy of holograph in possession of the author.