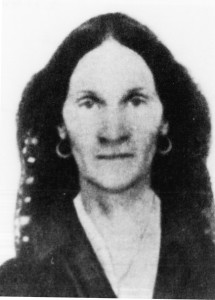 Marinda Nancy Johnson was born on June 28, 1815, in Pomfret, Vermont, to John Johnson and Alice Jacobs. The Johnsons moved to Hiram, Ohio, in 1818. After hearing about the Restoration in the winter of 1830, they traveled to Kirtland to meet the Prophet and were baptized. They invited the Smith family to stay with them at Hiram, so Joseph and Emma moved in and were living there in the spring of 1832.

The relationship between Joseph Smith and Marinda Nancy Johnson is difficult to decipher due to a lack of evidence. Todd Compton assessed: “For such an important woman, Marinda is surprisingly under-documented. I know of no holograph by her and have found only four letters to her.”1 “Marinda left no known reference to the marriage [with Joseph Smith], beyond signing an affidavit attesting that it happened.”2

Two separate sealing dates for Joseph Smith’s marriage to Marinda Nancy Johnson are available. Joseph Smith’s journal contains a list of a few of his plural wives written after the July 14, 1843, entry in the handwriting of Thomas Bullock: “Apri 42 marinda Johnson to Joseph Smith.”3

Four months before, Joseph Smith received a revelation for her:

Verily thus saith the Lord unto you my servant Joseph, that inasmuch as you have called upon me to know my will concerning my handmaid Nancy Marinda Hyde—behold it is my will that she should have a better place prepared for her, than that in which she now lives, in order that her life may be spared unto her; therefore go and say unto my servant, Ebenezer Robinson, and to my handmaid his wife—Let them open their doors and take her and her children into their house and take care of them faithfully and kindly unto my servant Orson Hyde returns from his mission, or until some other provision can be made for her welfare and safety. Let them to these things and spare not, and I the Lord will bless them and heal them if they do it not grudgingly, saith the Lord God; and she shall be a blessing unto them; and let my handmaid Nancy Marinda Hyde hearken to the counsel of my servant Joseph in all things whatsoever he shall teach unto her, and it shall be a blessing upon her and upon her children after her, unto her justification, saith the Lord.4

It is not known whether the statement “let my handmaid Nancy Marinda Hyde hearken to the counsel of my servant Joseph in all things whatsoever he shall teach unto her” is a general admonition or a specific reference, perhaps to plural marriage.

Marinda personally testified concerning a second sealing through a signed affidavit “that on the [blank] day of May A.D. 1843, at the City of Nauvoo, County of Hancock, State of Illinois, She was married or Sealed to Joseph Smith, President of the Church of Jesus Christ of Latter Day Saints, by Brigham Young, President of the Quorum of the Twelve Apostles, of Said Church, according to the laws of the same, regulating Marriage; in the presence of Eliza Maria Partridge Lyman, and Emily Dow Partridge Young.”5

Generally, a signed affidavit is considered more reliable than an entry in a journal by a scribe from an unknown source, but whether the first date is in error or two sealing ceremonies were performed is unclear.

If the 1842 date for the sealing between Joseph and Marinda’s marriage is correct, then Joseph may have been sealed to Marinda in an eternity-only sealing without Orson Hyde’s knowledge. However, John D. Lee remembered that Orson gave his permission: “Hyde’s wife, with his consent, was sealed to Joseph for an eternal state.”6

Whatever the sequence, Orson appealed to Joseph to perform his own plural marriage weeks after returning from his mission, stating in 1869: “In the month of February or March, 1843, I was married to Miss Martha R. Browitt, by Joseph Smith, the martyred prophet, and by him she was sealed to me for time and all eternity in Nauvoo, Illinois.”7

The details of the relationship between Marinda and the Prophet will probably never be known. If Marinda had chosen Joseph as her eternal husband, she apparently changed her mind because she chose to be sealed to her legal husband Orson Hyde in the Nauvoo temple on January 11, 1846.8

Marinda Nancy Johnson relocated to Salt Lake City in 1852 and later divorced Orson Hyde and was resealed by proxy to Joseph Smith. She died in 1886, having kept the faith in the Church.