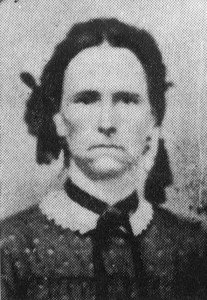 Malissa Lott was born on January 9, 1824, to Cornelius Peter Lott and Permelia Darrow Lott in Tunkhannock, Pennsylvania. Her parents were baptized in 1834 and the family soon migrated to Kirtland, Ohio, where they met Joseph Smith for the first time. In 1838 the Lotts moved to Missouri and then later to the outskirts of Nauvoo, Illinois, where Cornelius served as a caretaker for Joseph Smith’s farm.

On June 29, 1843, Eliza R. Snow recorded: “Took a ride to br. Lot’s in company with Mrs. Whitney, Mrs Durfee & Mrs. Holmes.”1 By that date, Eliza, Mrs. Durfee, and Mrs. Holmes may have all been sealed to the Prophet and Mrs. Whitney had approved her daughter’s plural marriage to him (of Sarah Ann Whitney). It is probable that the quartet discussed celestial marriage on that journey and possibly later with Malissa at the farm.

Malissa was sealed to the Prophet on September 20, 1843. In 1892, Malissa explained: “He [Joseph Smith] was the one that preached it [plural marriage], and taught it to me.”2 She also testified that Emma “knew all about it … she gave her consent.”3

When asked: “Who said that she gave her consent?” Malissa answered: “My father and mother. … I don’t know that they went to her or she came there. I know they were both there at the time with brother Joseph, – father and – mother, – the whole of them, talking a good many times.”4

Malissa Lott made a plain disclosure of her physical relationship with Joseph Smith during the Temple Lot depositions:

Q. Did you ever room with Joseph Smith as his wife?

Q. At what place?

Q. What place in Nauvoo?

A. The Nauvoo Mansion.

Q. At what place in the Mansion?

A. Do you want to know the number of the room, or what?

Q. Well just what part of the house the room was in if you can give it?

A. Well, I can give it and the number of the room too. It was room number one.

Q. How often did you room there with Joseph Smith?

A. Well that is something I can’t tell you.

Q. Well was it more than once?

Q. Did you ever at any other place room with him?

Q. Of course I mean as his wife?

Q. At what places?

The following year on August 4, 1893, when interviewed by Joseph Smith, III, she affirmed that she was the Prophet’s wife “in very deed”:

Q. Were you married to my father?

Q. Was you a wife in very deed?

Q. Why was there no increase, say in your case?

A. Through no fault of either of us, lack of proper conditions on my part probably, or it might be in the wisdom of the Almighty that we should have none. The Prophet was martyred nine months after our marriage.6

In late 1886 independent researcher Andrew Jenson interviewed Malissa and published this report in the December issue of the Historical Record:

WILLES, (Malissa LOTT,) daughter of Cornelius P. Lott and Permelia Darow, was born Jan. 9, 1824, in Bridgewater, Luzerne Co., Penn. Her parents having embraced the fulness of the Gospel, the family removed to Kirtland, Ohio, where Sister Melissa was baptized in November, 1837. After the expulsion of the Saints from Kirtland and Missouri, Brother Lott located with his family in Pike County, Illinois, where they remained until 1842, and then moved unto Joseph Smith’s farm, located some four miles east of Nauvoo, on the Carthage road. Shortly afterwards Sister Melissa became intimately acquainted with the Prophet’s family, and on Sept. 20, 1843, she was married to Joseph Smith for time and all eternity. She spent most of the following winter in his family, going to school in the so-called brick store. The Prophet’s children, Joseph, Frederick and Alexander, went to the same school, under the immediate watch-care of Sister Melissa. In the spring of 1844 she went back to live with her parents on the farm, where she remained until after the martyrdom of her husband in Carthage jail. Subsequently she lived with Emma Smith, occasionally, until the exodus in 1846, when she left Nauvoo with the rest of the Saints. After spending two winters at Winter Quarters, she accompanied her father’s family to G. S. L. Valley in 1848, coming through in Heber C. Kimball’s company. On May 13, 1849, she married Ira Jones Willes, formerly a member of the Mormon Battalion, with whom she lived in Salt Lake City and Lehi, Utah Co., until his death, Dec. 5, 1863. He was accidentally killed while crossing a creek near Lehi, being thrown from a load of wood into the water together with his son Cornelius John, about nine years old. Both were drowned. With Elder Willett Sister Melissa had seven children, of whom four are yet living. Although now somewhat advanced in years, she is still bright and active, and occupies a prominent position in the Lehi Female Relief Society. She is ever unflinching in her testimony of what she knows to be true, and states in the most positive terms, and without any hesitation, that she was sealed to Joseph Smith the Prophet on the above named date, and became, in the full meaning of the term, his wife, according to the sacred order of celestial marriage. She further states that when she was married to Ira Jones Willes, he fully understood that he was marrying a widow of Joseph Smith, the martyred Prophet; that their association together would end with this life, and that in the morning of the resurrection she would pass from him to the society of her deceased husband.7

Malissa Lott died in 1898 in Utah as a faithful, lifelong member of the church.

Maureen Ursenbach Beecher, ed., The Personal Writings of Eliza Roxcy Snow (Logan: University of Utah Press, 2000), 78.
Malissa Lott, deposition, Temple Lot transcript, respondent’s testimony, part 3, pages 102, question 181.
Malissa Lott, deposition, Temple Lot transcript, respondent’s testimony, part 3, pages 97, 100, questions 102, 156. Providing an alternate viewpoint, Joseph Smith, III, President of the RLDS Church, recalled that in an 1885 interview, Malissa denied that his mother, Emma, knew anything about her sealing to Joseph “before or after.” Mary Audentia Smith Anderson, ed., Joseph Smith III and the Restoration (Independence, Missouri: Herald House), 374.
Malissa Lott, deposition, Temple Lot transcript, respondent’s testimony, part 3, page 100, questions 159–61.
Malissa Lott, Deposition, Temple Lot Transcript, part 3, pp. 97, 105–6, questions 87–93, 224–60. Joseph Smith III, who believed Malissa was not married to his father during his lifetime, recorded in 1894: “Melissa Lott. I knew her well, a bright good girl. Am glad that she was only for eternity or adopted into the family. But she was plenty large and old enough to be any man’s companion in cohabitation when I knew her; and about the only one of the entire outfit named by you [of twenty possible plural wives of Joseph Smith mentioned in the previous letter] whom I would be inclined to believe if she should tell me herself that father did cohabit with her.” Joseph Smith III, Letter to Bro. E. C. Brand, January 26, 1894, p. 66.
Notarized statement in possession of Myrtle Willes Bailey [granddaughter of Malissa Lott Smith Willes]. Typescript sent to Raymond Bailey on December 11, 1949. Quoted in Raymond T. Bailey,. “Emma Hale: Wife of the Prophet Joseph Smith,” (master’s thesis, Brigham Young University, 1952), 99–100.
Andrew Jenson, The Historical Record, December 1886, 119.