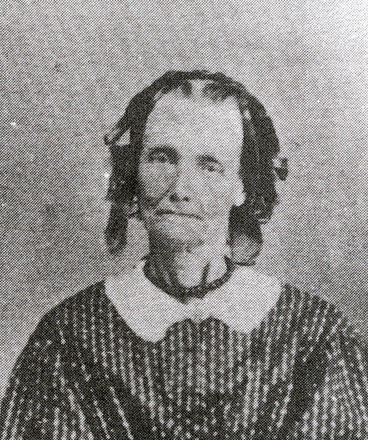 Born November 23, 1813, the daughter of Austin and Phoebe Wilbur Cowles, Elvira was baptized on October 19, 1835. The following year she went to Kirtland, probably with her family. By October of 1838, the Cowles family were in Far West, Missouri, only to move to Nauvoo, Illinois, in early 1839.

Elvira’s obituary indicates that in the spring of 1840 she lived in the Smith household, staying until she married.1 She and her future husband, Jonathan Holmes, were engaged by September 1842 and married on December 1, 1842.2

Eliza R. Snow penned a poem to the couple:

Like two streams, whose gentle forces
Mingling, in one current blend–
Like two waves, whose onward course
To the ocean’s bosom tend –

Like two rays that kiss each other
In the presence of the sun –
Like two drops that run together
And forever are but one,

May your mutual vows be plighted­ –
May your hearts, no longer twain
And your spirits be united
In an everlasting chain.3

Elvira was nominated treasurer of the Nauvoo Relief Society at its organization on March 17, 1842.

Little is known regarding Elvira’s sealing to Joseph Smith or whether it was for eternity only or time and eternity. On August 28, 1869, she signed an affidavit stating that she was sealed to the Prophet on June 1, 1843, without specifying the type of sealing.4

On February 9, 1938, just months before her death at eighty-eight years of age, Phebe Louisa Holmes, daughter of Elvira Ann Cowles Holmes, recalled, “I heard my mother testify that she was indeed the Prophet’s (Joseph Smith) plural wife in life and lived with him as such during his lifetime.”5

A letter written on June 2, 1931, by church member William Wright may help to qualify the relationship between Joseph, Jonathan, and Elvira:

I was well acquainted with two of Joseph’s wives, LaVina [Elvira] and Eliza [Snow or Partridge]. I came to Utah in ’69, and rented LaVina Holmes farm. Before Joseph was shot, he asked Jonathan Holmes if he would marry and take care of LaVina, but if LaVina wanted him to take care of her he would take her. He would fill that mission to please his Father in Heaven.7

Although this letter is very late and secondhand, it is reportedly from a man who spoke with Elvira. It seems to corroborate that Jonathan may have been given a “mission” to marry Elvira and “take care of her” in a legal pretend marriage. After the martyrdom, Jonathan would have been free to take Elvira as his own wife.

She did not conceive her first child until seven months after Joseph’s death. The couple went on to have a total of five children together. Jonathan apparently respected his wife’s sealing to Joseph Smith, standing proxy in the Nauvoo temple as she was resealed to him vicariously for eternity.8

Without additional historical documentation, the precise relationship between Joseph and Elvira is impossible to discern.