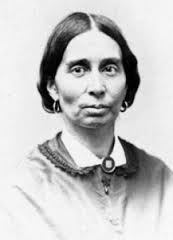 Eliza Maria, born on April 20, 1821, was the eldest child of Edward Partridge and Lydia Clisbee. In late 1830, missionary Parley P. Pratt visited the Partridges, then living in Kirtland, Ohio, baptizing them as some of the newest members of the church. On February 4, 1831, Edward was called to be the first bishop in the Church.

The Partridges migrated to Missouri and endured the hardships of the first Church members there. Moving to Nauvoo in January 1839, they stayed in a tent until a log cabin could be built. Unfortunately, Edward unexpectedly died on May 27, 1840, leaving the family fatherless. Eliza and Emily then went to live in the Prophet’s home.

Unlike her sister Emily, Eliza M. Partridge wrote little regarding her plural marriage to the Prophet. In 1869 she signed four affidavits attesting to her sealings and her witnessing two other plural marriages.1 In 1877 Eliza penned an autobiography, making a brief mention of her own sealing:

After a time my sister Emily and myself went to live in the family of the Prophet Joseph Smith. We lived there about three years. While there he taught to us the plan of Celestial marriage and asked us to enter into that order with him. This was truly a great trial for me, but I had the most implicit confidence in him as a Prophet of the Lord and not but believe his word and as a matter of course accept of the privilege of being sealed to him as a wife for time and all eternity. We were sealed in 1843 by Heber C. Kimball in presence of witnesses. I continue to live in his family for a length of time after this. …

Times were not then as they are now in 1877 but a woman living in polygamy dare not let it be known and nothing but a firm desire to keep the commandments of the Lord could have induced a girl to marry in that way. I thought my trials were very severe in this line, and I am often led to wonder how it was that a person of my temperament could get along with it and not rebel. But I know it was the Lord who kept me from opposing his plans, although in my heart I felt I could not submit to them. But I did, and I am thankful to my Heavenly Father for the care he had over me in those troublous times. 2

In contrast to several other plural wives, Eliza admits that at the time of her sealing, she had no personal witness of the need to enter plurality, but instead relied upon her testimony of the prophetic role of Joseph Smith. She also recounted a common theme, her own “severe trials” associated with living plural marriage.

Two references from Benjamin F. Johnson indicate that this marriage was consummated. (Click here to view evidences.) In 1903 Johnson wrote: “The first plural wife brought to my house with whom the Prophet stayed, was Eliza Partridge.”3 A year later, Benjamin penned a letter to the Deseret News: “I saw one of my sisters married to him [Joseph Smith] and know that with her he occupied my house on May 16 and 17, 1843, which he had occupied with Eliza Partridge, another plural wife, on the 2nd of the previous month.”4

At some point, Eliza may have had an altercation with Emma Smith. An unidentified “Mrs. J.” allegedly told antagonist writer Wilhelm Wyl: “Eliza Partridge, one of the many girls sealed to the prophet, used to sew in Emma’s room. Once, while Joseph was absent, Emma got to fighting with Eliza and threw her down the stairs. ‘That finished my sewing there,’ Eliza used to say.”5

This account may be fictional, but it is clear that Emma eventually sent the Partridge sisters away from the Nauvoo Mansion. Eliza’s sister Emily recalled:

Emma was present [at the sealing of Emily and Eliza]. She gave her free and full consent. She had always up to this time, been very kind to me and my sister Eliza, who was also married to the Prophet Joseph Smith with Emma’s consent; but ever after she was our enemy. She used every means in her power to injure us in the eyes of her husband, and before strangers, and in consequence of her abuse we were obliged to leave the city to gratify her, but things were overruled otherwise, and we remained in Nauvoo. My sister Eliza found a home with the family of Brother Joseph Coolidge, and I went to live with Sister Sylvia Lyons. She was a good woman, and one of the lord’s chosen few.6

The precise month of their departure is not known, but it would have been after August 31, 1843, when the Smith family moved into the Mansion house and most likely after October. 7

Despite some altercations, William Clayton remembered: “During this period [1843] the Prophet Joseph took several other wives. Amongst the number I well remember Eliza Partridge, Emily Partridge, Sarah Ann Whitney, Helen Kimball and Flora Woodworth. These all, he acknowledged to me, were his lawful, wedded wives, according to the celestial order. His wife Emma was cognizant of the fact of some, if not all, of these being his wives, and she generally treated them very kindly.”8

After the martyrdom, Eliza Partridge married Amasa Lyman and immigrated to Utah. Eliza died in 1886. She was a faithful member of the church her entire life.