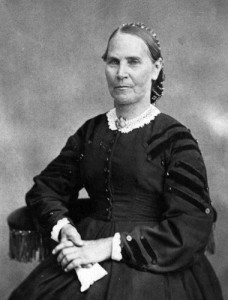 On October 6, 1809, Desdemona was born to Peter Fullmer and Susannah Zerfass Fullmer in Huntington, Pennsylvania. The Fullmer family settled south of Cleveland, Ohio, in 1835, and Desdemona was converted and baptized two years later. Desdemona moved to Nauvoo. and according to the Nauvoo 4th Ward records, she was living in Joseph Smith’s home in the spring of 1842.

She gave this brief account: “Having been convinced of the truth of polygamy I therefore entered into the order but I dared not make it known not even to my parents for I was forbidden by the Prophet for it would endanger the life of Joseph and also many of the Saints.”3 She also reported a night vision in which an angel told her that the polygamy doctrine was true. 4

After I left [moved out of] brother Joseph’s House, Sister Hyrum Smith [Mary Fielding Smith] wanted me to come for the winter with her to work tailoring as that is trade and while I was liveing at their house Hyrum had by some way lernt something about Poligamy So one evening while the family of us ware sitting arround the fire he said to me I will ask you a fair question will you answer me Yes Sir Bro. Hyrum he Said Soposing Bro Joseph would Say to you that he had a revelation from God that it was right for him to have another wife besids Emma would you believe it was of God.5

Perhaps caught off guard by Hyrum’s direct methods, Desdemona quickly recovered by asking Hyrum if he believed Joseph Smith was a prophet. He answered, “Yes.” Then she gave her opinion that since Joseph is a prophet, she cannot pick and choose which revelations she will believe. There the conversation ended. The next morning:

He [Hyrum] made mention of the subject in the following words Said he if I knew–that any– or tho’t that any women in his house believed in Such doctrine as Polygamy I would kick them 40 Rods from this house and follow them and kick them still further Soon after that I made tracks not feeling it safe to stay thare any longer and went to another place to live and while liveing thar a few weeks.6

On May 26, 1843, William Clayton recorded: “Hyrum received the doctrine of priesthood.”7 Shortly after his change of heart, Hyrum returned to Desdemona, whom he had earlier threatened:

Afterwards Bros Joseph and Hyrum came a long and call’d thare and Brother Hyrum wanted to talk with me and said do you remember how I talk’d when [you were] at my Home[?] Yes Sir I do[.] he said Now I have come to make it right with you I hurt your feelings I ask your forgiveness and whare I have said anything against the Doc of Poligamy in public or in private I must take it all back for the Lord has shown unto me that I was wrong and that Joseph was right[.] then he (Hyrum) preach’d to me and exorted me much and said that I had done God Servis and for me to hold on to the faith that was taught me by Joseph and much mor he said to me on the subject that I cannot write.8

Possibly reflecting the biases of Utah Church leaders against Emma Smith, Desdemona penned on Jun 7, 1868: “In the rise of polygamy, I was warned in a dream Amy [Emma] was going to poison me I told my dream to brother Joseph he told me it was true. She would do it if she could.” 9

Desdemona migrated to Utah with the Saints and died in 1886, a lifelong member.