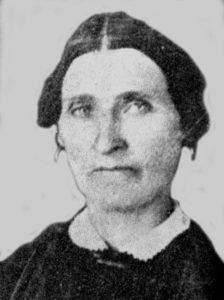 Delcena was born November 19, 1806, in Westfield, Vermont, to Ezekiel Johnson and Julia Hills Johnson. She married Lyman Royal Sherman on January 16, 1829. She and her husband, like others of her family, were converted to the Church in January 1832. The Shermans moved to Kirtland, Ohio, probably in June 1833 with Mrs. Julia Johnson and family, where they resided until 1838. Lyman Sherman died in early 1839 and was a close friend of the Prophet.

Delcena left no record of her relationship with Joseph. Benjamin F. Johnson, her brother, provided the sole evidence corroborating her sealing, dating it to “The marriage of my eldest sister to the Prophet was before my return to Nauvoo [on July 1, 1842], and it being tacitly admitted, I asked no questions.”1

Delcena was married to Joseph Smith for time and was later sealed for eternity to Lyman Sherman by proxy in the Nauvoo temple. 2

Joseph’s plural widows were given a choice to whom they would be sealed in the Nauvoo temple.