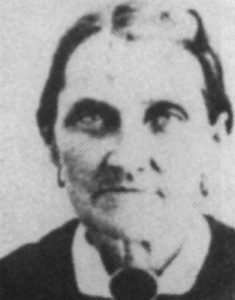 Almera Woodard Johnson was born October 12, 1812, in Westfield, Vermont, the daughter of Ezekiel Johnson and Julia Hills Johnson. She moved to Kirtland, Ohio, in 1833 with her family where she, her siblings, and her mother were baptized two years later.

Mary Elizabeth Lightner, a plural wife of the Prophet, related how an angel appeared to Joseph Smith in 1834 commanding him to restore the practice of polygamy. She recalled his words: “The angel came to me three times between the years of 1834 and 1842 and said I was to obey that principle or he would slay me.” 1

Benjamin F. Johnson, Almera’s brother, who was a close friend of the Prophet, remembered: “In talking with my mother … he [Joseph Smith] told her that when the Lord required him to move in plural marriage, that his first thought was to come and ask her for some of her daughters; and I can now understand that the period alluded to was at Kirtland, where she had three unmarried daughters at home.”2 Almera was one of those “three unmarried daughters,” but her introduction to plural marriage occurred seven years later through the assistance of her brother Benjamin who later wrote:

On the first day of April A.D. (1843,) eighteen hundred and forty-three, President Joseph Smith, Orson Hyde, and William Clayton and others came from Nauvoo to my residence in Macedonia or Ramus in Hancock Co. Illinois, and were joyfully welcomed by myself and family as our guests.

On the following morning, Sunday April second, President Smith took me by the arm for a walk, leading the way to a secluded spot within an adjacent grove, where to my great surprise, he commenced to open up to me the principle of plural or celestial marriage, but I was more astonished by his asking for my sister Almera to be his wife.

I sincerely believed him to a prophet of God, and I loved him as such, and also for the many evidences of his kindness to me, yet such was the force of my education, and the scorn that I felt towards anything un-virtuous that under the first impulse of my feelings, I looked him calmly, but firmly in the face and told him that, “I had always believed him to be a good man, and wished to believe it still, and would try to;”– and that, “I would take for him a message to my sister, and if the doctrine was true, all would be well, but if I should afterwards learn that it was offered to insult or prostitute my sister I would take his life.” With a smile he replied “Benjamin, you will never see that day, but you shall live to know that it is true, and rejoice in it.”

He wished me to see my sister and talk to her,– I told him, I did not know what I could say to convince her, he replied, “when you open your mouth, you shall be able to comprehend, and you shall not want for evidence nor words.”… I called my sister to private audience and with fear and trembling, and feelings that I cannot express commenced to open the Subject to her, when, just as he had promised, the light of the Lord Shone upon my understanding and my tongue was loosed and I at least was convinced of the truth of what I was attempting to teach.

My sister received my testimony, and in a short time afterwards consented to become the wife of President Smith.

Subsequent to this I took her to the City of Nauvoo, where she was married or Sealed for time and eternity to President Joseph Smith, by his brother Hyrum, in the presence of myself, and Louisa Beaman who told me She had also been Sealed or married to the Prophet Joseph.3

In 1883, Almera provided this recollection:

That in the years 1842 and 1843, I resided most of the time at Macedonia, in the County of Hancock, State of Illinois, sometimes with my sister who was the wife of Almon W. Babbitt, and sometimes with my brother Benjamin F. Johnson. During that time the Prophet Joseph Smith taught me the principle of Celestial Marriage including plurality of wives and asked me to become his wife. He first spoke to me on this subject at the house of my brother Benjamin F. I also lived a portion of the time at Brother Joseph Smith’s in Nauvoo, when many conversations passed between him and myself on this subject. On a certain occasion in the spring of the year 1843, the exact date of/ which I do not now recollect, I went from Macedonia to Nauvoo to visit another of my sisters, the one who was the widow of Lyman R. Sherman, deceased, at which time I was sealed to the Prophet Joseph Smith. At the time this took place Hyrum Smith, Joseph’s brother, came to me and said, I need not be afraid. I had been fearing and doubting about the principle and so had he, but he now knew it was true. After this time I lived with the Prophet Joseph Smith as his wife, and he visited me at the home of my brother Benjamin F. at Macedonia.4

It appears the sealing was for time and eternity and was consummated. (Click here to view evidences.) Benjamin Johnson also recorded:

The Prophet with Louisa \Beeman/ and my Sister Delcena, had it agreeable arranged with Sister Almara and after a little instruction, She Stood by the Prophets Side and was Sealed to him as a wife by Brother Clayton.  After which the Prophet asked me to take my Sister to occupy Room No 10 in his Mansion home dureing her Stay in the City. But as I could not long be absent from my home & Business We Soon Returned to Ramus, whare on the 15th of May Some three weeks later the Prophet again Came and at my house ocupied the Same Room & Bed with my Sister.5

Andrew Jenson recorded that Almera Johnson “removed to Nauvoo, where she was married to the Prophet Joseph Smith. … The ceremony was performed by Elder William Clayton at the house of Almera’s sister, Mrs. Delcena D. Sherman. Patriarch Hyrum Smith was present and remarked at the time to Sister Almera, ‘The Lord has revealed the principle of plural marriage to me, and I know for myself that it is true. I will have you for a sister[-in-law], and you shall be blest.’”6

After the martyrdom, Almera married Reuben Barton and together they had five children. The couple divorced in 1860, and Almera migrated to Utah, settling in Parowan. She died on March 4, 1896, a faithful member of the Church of Jesus Christ of Latter-day Saints.